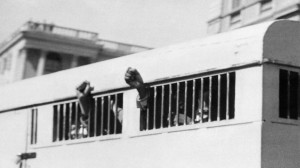 END_OF_DOCUMENT_TOKEN_TO_BE_REPLACED

Disarmed by the officers of order, but determined to arm my speech against them…

In the cheap theatrical play called trial, the judges like wretched actors, struggle to hide the rawness of the violent imposing of state authority. The democratic decision of a lengthy sentencing to the correctional hell-holes is presented as a product of dialogue in which the accused also participates. Authority washes the blood away with appearances of justice, humanism, leniency or worst case scenario, necessity. And the word of authority is articulated in the code of the law, that is the language of fraud which serves the maintaining of the status quo of state and capital.

I refuse to speak the language of the enemy in order to negotiate my sentence and this is why I do not recognize any legal representation.

I refuse to participate in this play, I respect of course the attempt of the comrades to sabotage it by refuting the monolithic speech of civil justice at every stage of the procedure.

It is generally, because I refuse to accept the whole obsession of the juridical mechanism, not only the way its applied now but also any possible application of it in different kinds of regimes. Because no institutionalized special body has jurisdiction to impose its judgement on the choices and actions of other people. And no code of laws can fit the wealth of human relations in such a complex reality which every

group of rules fails to mold. Such a procedure stems from state imposition and this serves, keeping connected the authoritarian social web which as an anarchist I want to destroy, in order for raw human anti-authoritarian relations, whose only connecting web will be emotion and conscience, to shine.

If the above seem abstract generalities, my refusal is specific when it comes to accepting the ethics of capital, the sacretization of individual property which the whole legal code is orientated towards protecting. I have been a thief and robber disputing the sacred chalice of capitalism. Because property means exclusion, it means accumulation, it is the womb of the dominant form of exploitation and oppression, the economic. And its force, is its diffuse, its everywhere, in everyone, like the ticket to the world of capitalism.

More substantive I will speak of my refusal to accept the objective value of human life as its defined by the law of the state, which provocatively discredits the workers murdered by the impunity of the bosses.

Which provocatively discredits the suicides in the prisons where it buries people alive.

Which discredits the hecatombs of dead from military operations.

Which provocatively discredits the immigrants it drowns at the seas, blows up or shoots at the borders which divide zones of graded economic exploitation.

Which provocatively discredits the lives of people transforming all of us into products, a procedure which goes through the constant torture of the disobedient or the weak. From the children-slaves of multinationals in the third world, to the brutality of the meat industry is a very short distance.

And in the ends it provocatively and disrespectfully discredits earth itself, leading it to mass illness and death by the technological-industrial civilization of pollution.

This is why I as an anarchist discredit the lives of the economic, political and scientific executives of the system, as well as those who follow their orders, servants of the police-juridical complex which defends murderous order of this world.

This is why when I was up against teo cops who tried to steal my freedom, I sought besides my escape also their physical extermination. Do not be shocked little people of the panel of judges, because if there value in human life it in connection with freedom and your life, that of the robbers of freedom has a negative value.

And in my value system maybe a cop could, under specific conditions, be dealt with leniency, every judge however has a place in a grave for those people they have buried alive.

EVERYTHING FOR FREEDOM
Giannis Mihailidis